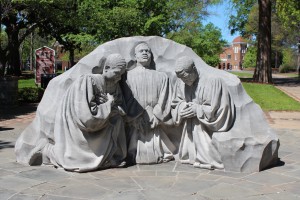 On this day, Sunday April 7, 1963, “Palm Sunday,” three ministers–Nelson Smith, A.D. King, and John Porter–led 2,000 citizens in a march from St. Paul’s Methodist Church to Birmingham’s City Hall. The march protested the previous day’s arrest of Martin Luther King, Jr., Ralph Abernathy, and Fred Shuttlesworth. When the city’s Commissioner of Public Safety, Bull Connor, confronted the marchers, the three ministers knelt to pray. To commemorate their brave act of nonviolence in the face of racist power, the city placed a statue of the men in Kelly Ingram Park in 1992. Today the park, which contains several sculptures marking famous events of Birmingham’s civil rights movement, calls itself “A Place of Revolution and Reconciliation.” 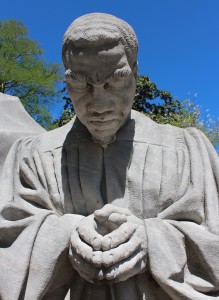 At the park’s northwest corner, visitors can start two of Birmingham’s Civil Rights Heritage Trails. On Thursday, April 7, 2016 — the anniversary of these three ministers’ Palm Sunday march — I will begin a series of walks through Birmingham. Some of these walks follow official Heritage Trail routes; others move off the beaten path to seek untold civil rights stories.

As a Birmingham native and a civil rights movement scholar, my walk is timed for its historical and spiritual significance. The city’s most contentious civil rights battles took place during April and early May of 1963, coinciding with an Easter season boycott of downtown stores and businesses. Those notorious six weeks, known as the Birmingham Campaign, forever changed the city and the trajectory of the movement. Here, Martin Luther King, Jr., passionately articulated the philosophy of nonviolent direct action in “Letter from a Birmingham Jail.” Here, regular people — iron and steel workers, domestics, school children — showed the world how to take on racial apartheid and win. 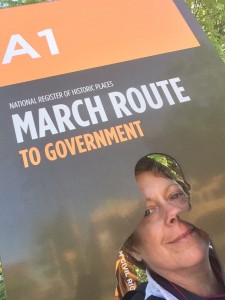 Walking in their footsteps and visiting key movement locations acts as a secular version of the religious pilgrimage called Stations of the Cross, where travelers follow a designated path from site to site. For Christians the goal is to reflect upon Christ’s suffering. For this civil rights pilgrim, the goal is to reflect upon the kneeling down and give thanks for the standing up.