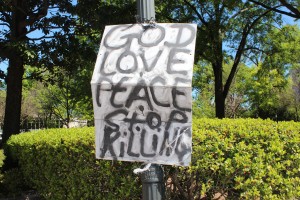 Arriving into Birmingham-Shuttlesworth International Airport for my civil rights pilgrimage, I felt conflicted. I usually feel a bump of pride when the plane hits the tarmac. The Birmingham International Airport’s Board of Directors voted in 2008 to rename itself after local leader Fred Shuttlesworth (1922-2011), instrumental in the Alabama Christian Movement for Human Rights. How many other airports are named after civil rights heroes?

Since this flight landed from the northeast, however, I realized that the runway was likely passing over the remains of artist Lonnie Holley’s art yard.

Holley (b. 1950) is an African-American artist whose work is on display at the American Museum of Folk Art and the Smithsonian Museum of American Art. He works in a variety of media, but what drew the most notoriety was the property he used to own in Birmingham’s Airport Hills. Some called it a sculpture garden, others a junk yard. Either way, when the airport decided to expand, Holley’s yard had to go, despite an outcry from the international art community. The airport authority initially offered Holley $14,000, including the site-specific installations. Holley sued, settling for a meager $165,000, moving expenses included. In late 1997, Holley managed to get out about half of his art before the city bulldozed the rest, moving his family to a piece of foreclosed rural property south of Birmingham. . . .

. . . .next to white people who did not want him for a neighbor. They shot guns into his house and finally shot him. Holley now lives in Atlanta, the “city too busy to hate.” Dust to Digital, the recording label that produces Holley’s improvisational jazz, his new medium of choice, has released a music video that includes images of his art, his yard, and – painfully – the property’s destruction. One can access it at All Rendered Truth. 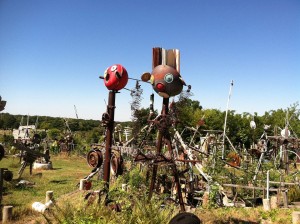 Holley is not Birmingham’s only visionary yard artist. In southwest Birmingham, Joe Minter keeps the “African Village in America.” Minter, the “Peacemaker,” collects material from flea markets, thrift stores, and junkyards, repurposing it into sculpture that comments on the African diaspora, human rights, and God’s work in the world. The more visually striking pieces are fabricated from used auto parts and look out on Grace Hill Cemetery – a hill of 100,000 ancestors, he told me.

I have loved Holley’s and Minter’s work for years, and have a selection from each in my home. These aren’t just folk art collectibles, but roots to my complicated Birmingham legacy. 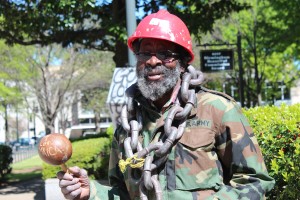 Imagine my surprise, when, Day 1 of my civil rights pilgrimage brought me face to face with Joe Minter. I was trying to connect two legs of Birmingham’s Civil Rights Heritage Trail at Linn Park, in the city’s center. Minter has been speaking his truth to power there for years. 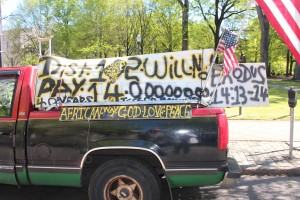 A sign on Joe Minter’s truck references a scandal involving the Jefferson County sewer system which led to the largest municipal bankruptcy in U.S. history. Photograph by Julie Armstrong

What does he protest? Some of it involves specifics: the Jefferson County sewer construction boondoggle that led to the largest municipal bankruptcy in U.S. history. Some of it involves a general lack of respect: Minter is a talented artist who has not received his due. Holley got a Museum of Art retrospective in 2004, after his property was torn down. When I asked about Minter at the library, the information specialists, who have assisted me before on the most arcane aspects of Birmingham history, looked puzzled: “is he that man who rings the bell?”

The answer is, yes, he used to, but now he has a gourd that says, “I love Jamaica.”

And, now, the final indignity, Minter tells me: his property has been condemned.

I asked him why. His reply: “Because Birmingham condemns everything that is good” and “the city does not want a parcel being free of thought.”

I’m not sure what the facts are at this point, but I do know this: both Holley’s and Minter’s yards gave them artistic, existential, and spiritual freedom in a city where freedom may have been on the books since 1963 but has not always been practiced.

Explaining that last sentence takes a book, not a blog, to tell. Stay tuned – not just to me but to voices like Joe Minter’s. The vision he offers transforms Birmingham’s hardscrabble detritus into beautiful freedom.